When most of us think of spaces, we think of hitting the spacebar, and moving on. Did you know that InDesign supports additional spaces? Ok, lots of them? Sometimes I have to suppress a giggle when I direct my Introduction to Adobe InDesign students to the Insert White Space options—somebody will always gasp when they see the long list! Have you seen it yet? Open up the Type menu and pick Insert White Space: 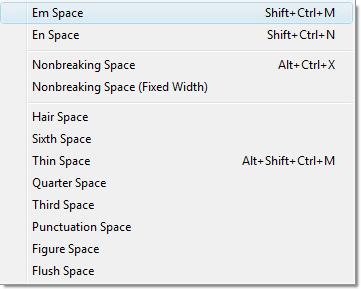 Before we cover all of those options, how about if we just discuss the spacebar for a moment? The spacebar is used to separate the words within a sentence. Spacebar spaces are proportional, and can expand and contract as type is set to full justification (that’s how InDesign gets each line to start at the right margin and end at the left margin). Contrary to what you were taught, good design calls for one (just one!) space between sentences and after punctuation. If this is news to you, please go read Adobe InDesign: Removing Unwanted Spaces, Fast!

Meanwhile, back to the list. Most of these are fixed width spaces, that do not expand or contract their width when a paragraph is justified. In the first group, their width is based on an em space.

The next two can be useful in tables, especially when you don’t want to have to set tab stops to line up the columns:

Saving the best for last, the flush space is the coolest cat in the spacing crowd: