Typesetting fractions is no fun, or at least it didn’t used to be. The introduction of OpenType fonts and the Glyphs panel were a great help, allowing point and click access to additional commonly used options: 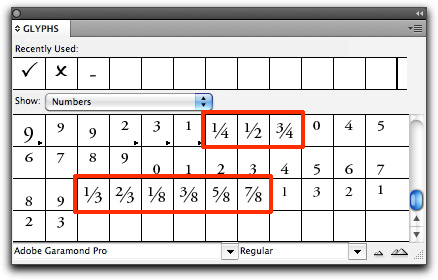 But what if you need a fraction that isn’t included in the character set? You can manually superscript the numerator, kern the slash, and then go to work on the denominator. Or not! Wouldn’t it be cool if you could just type 1/2 and have it automatically format it as

For this sequence to work you need to a.) use InDesign CS4 or later and b.) use an OpenType font that offers numerators and denominators. Take Adobe Garamond Pro, for example. If you open the Glyphs panel (Type > Glyphs), you can show both the numerators: 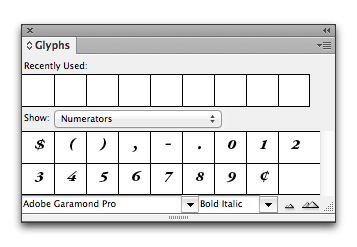 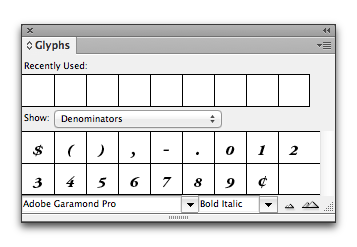 However, if you change the font (on the bottom row of the Glyphs panel) to Birch (another OpenType font): 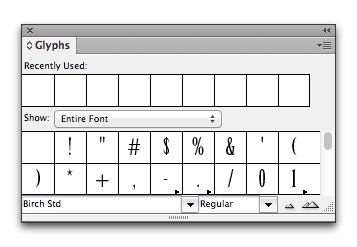 You will notice that it does not have numerators and denominators, therefore, the technique shown above will not work. 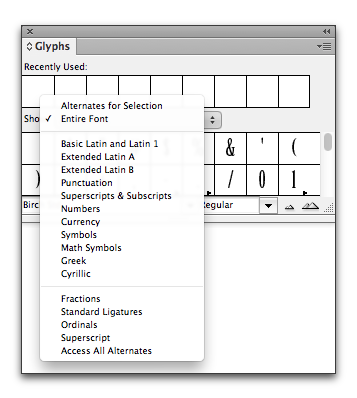 Also, the GREP won’t work for you if you have a whole number, followed by a fraction (i.e., one and a half cups of flour typeset in fraction form). In that situation, add a space—spacebar, thin space, hair space—between the whole number and the numerator. Or, if you are sure that all of your fractions are single digits, you can just change the GREP from \d+/\d+ to just \d/\d to tell InDesign to only match a single digit numerator and denominator. (The plus symbol aftr the \d matches one or more digits, which is why it grabs the leading digit.)